In 1990, the Master Plan for Kokanee Glacier Park was released after extensive local consultation. The plan identified the need to preserve and restore the old cabin, now over 100 years old. It was recognized at that time that the cabin was suffering from the affects of year-round use and that preservation was only possible if a new cabin was constructed to remove the burden of accommodation from the Slocan Chief. The Slocan Chief Restoration Since the release of the Master Plan for Kokanee Glacier Park in 1990, the Friends of West Kootenay Parks worked towards the day when the restoration of the Slocan Chief Cabin could begin. For nearly fifteen years, we slowly accumulated funds for that purpose. The restoration phase of the Slocan Chief was funded almost entirely from funds donated from four sources. The Friends of West Kootenay Parks would like to thank the estate of Lindsay and Jules Holt, without whose bequest the work would have almost certainly been delayed. In addition, significant contributions came from Kokanee Glacier Mountaineering (Kevin Giles), the late Les Weisbrich (for the print rights to the painting "Slocan Chief Cabin" - and the individuals who have purchased prints) and the 1988 Foundation. Finally, the Friends would like to thank the many individuals who made small donations or bought a Slocan Chief tshirt.

On July 6/04, tons of building materials and tools were flown from the Gibson Lake parking lot to the Slocan Chief Cabin. The day's activity marked the start of the final phase of the Kokanee Glacier Alpine Campaign, the restoration of the historic Slocan Chief.Thanks to the expertise of the BC Parks employees who supervised the ground crews and the experience of pilot Ken Plautz from High Terrain Helicopters, the 27 loads were flown up in 3 hours - the only hitch occurred when a log broke free from it's sling and smashed to the ground just before Kokanee Lake. The weather was poor, with gusty winds and rain showers causing delays but by the end of the day, the delivery had been completed.
The next day, Joern Wingender (owner of the Traditional Timber Framing Company) and Bill Bryce from the Friends flew up bringing food and better weather. The Friends had organized a work party for the weekend and Joern was bringing supplies for the next two weeks. Bill was dropped off at the Kokanee Glacier Cabin while Joern went on to the Ranger's A-Frame.
Slocan Chief Cabin - Work Party, July 8-11/04 Early July 8, seven volunteers set out from Gibson Lake for the hike up to the Kokanee Glacier Cabin. Tom Bryce, Maurice de St Jorre, Paul Hinton, Joe Johnston, Kenji Kitagawa and cooks Molly Smith and Mies Bryce were meeting Bill Bryce for a weekend of hard work. 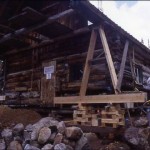 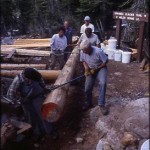 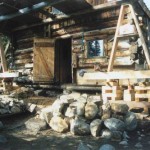 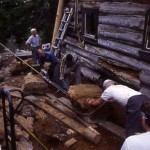 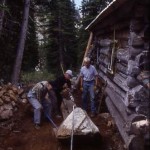 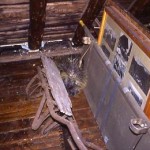 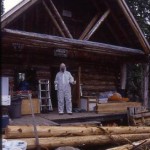 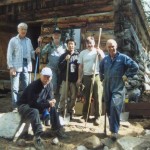 While the pictures above show the work done around the cabin, the crew was kept fueled by the efforts of Mies Bryce and Molly Smith, who hiked over from the Kokanee Glacier Cabin to the Slocan Chief 3 times each day, bringing snacks for breaks and lunch. The volunteer crew spent 2 1/2 days at the cabin, preparing the ground for foundation work and moving the new logs into place around the cabin. It was physically demanding but very satisfying work as the job-site was organized for the contractors to continue the restoration. Slocan Chief Cabin - Restoration, July/August 2004
In order to save time and a great deal of repetetive effort, Joern decided to try lifting the cabin by it's top logs rather the jacking up each corner separately. This allowed for the removal of all of the old logs at once, facilitating the excavation and construction of the foundations.
[Show as slideshow]

The crew worked 2 weeks in, 4 days out and 2 more weeks in. Even at that, Joern went up later in the summer to complete several small jobs. The Friends of West Kootenay Parks were fortunate to be able to secure the services of exacting and dedicated craftsmen for this project.
Slocan Chief Cabin Work Party, Fall 2004

One piece of the restoration puzzle was left to complete - metal panels to protect the cabin walls from rain and snow. The panels will be installed against the cabin every year from late September to late June.

While Joern and his crew worked away at the cabin, a related project was taking shape in Nelson. The Nelson Brewing Company donated the services of welder Jack Enns to produce 18 aluminum frames that would hold the metal siding. A party of volunteers assembled the panels early in the fall and on October 23, flew in to install them.