On June 30 1993, Coast Guard employees turned off the light which had guided mariners on the lake since 1905. Even worse, the review undertaken by the Federal Government declared the lighthouse unnecessary and plans were made to tear it down. By 1995, a partnership of local interest groups had joined forces to take over the maintenance of the Pilot Bay Lighthouse. The Riondel Historical Society, the Kootenay Lake Environmental Education Centre Society ("KLEECS") and the Friends of West Kootenay Parks Society ("Friends") convinced BC Parks that they would be able to maintain the building if BC Parks would take over ownership.

With the commitment made, the next step was raising funds. The Friends, with help from KLEECS, published Susan Hulland's "The History of Pilot Bay Lighthouse". A steady seller, the book is available throughout the Kootenays and directly from the Friends. In 1997, family and friends of area pioneer William Fraser generously donated to the lighthouse to commemorate Mr. Fraser's 100th birthday.

Since taking on the responsibility for maintenance, several projects have been carried out. In 1995, the outside of the building was scraped and painted. An outhouse and picnic table were installed at the site and in 2001, a major renovation was undertaken. With funding from BC Parks, the Friends hired restoration specialist Joern Wingender to undertake the improvements recommended in an earlier study. Wingender's company, The Traditional Timber Framing Co of Harrop/Procter installed a proper foundation, replaced sill boards, repaired decayed wood in several places and installed proper flashings (a Friends work party showed up in June to do the excavation). In 2002, Wingender was hired again to make changes to the interior that would improve access and safety for visitors. In the fall of 2003, The Traditional Timber Framing Company made the most noticeable changes yet when they were contracted to reinstall the windows on the south side of the building.

A year after 100th birthday of the lighthouse in 2005, the shake siding was replaced and a new, safer railing was installed around the cupola deck. At the same time interpretation signage for the building was prepared and installed to commemorate the history of the lighthouse and the efforts that were made to preserve it.

In 2013, 18 Friends and other volunteers repainted the lighthouse in 160 hours over 7 days. Thanks to Asa MacLaurin and his firefighting unit crews from the Ministry of Forests for helping out with the pressure washing of building prior to painting.

We invite you to visit the Pilot Bay Lighthouse. Turn south from the ferry landing at Kootenay Bay and follow the road to the end. About 100 metres from the turnaround, the trail to the lighthouse starts on the west side, a walk that takes 10 to 15 minutes. 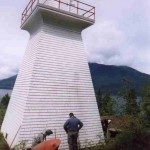 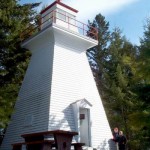 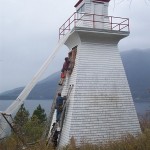 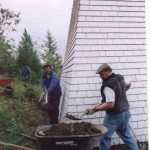 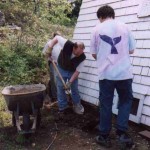 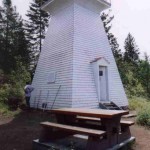